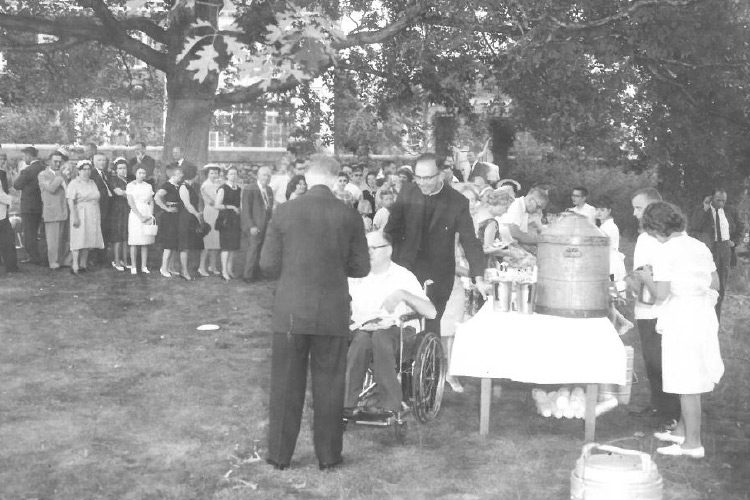 Some of you may remember the Camillian presence in Massachusetts. In the late 1940s federal and state governments began to require specific training for nurses. At that time, most institutions that trained nurses did not accept male students. Massachusetts was one of few states that would train male nurses. In May 1948 the first Camillians enrolled as nursing students in Cambridge, Massachusetts.

In 1962 the Camillians purchased an old estate on 34 acres in Whitinsville, Massachusetts with the intention of building a hospital. Construction began in 1963 and was completed in July 1964. When it opened its doors St. Camillus Hospital for the Chronically Ill had room for forty-eight patients. The patients’ rooms were on the second floor along with a barber shop, kitchen and central bathing area. The lower level consisted of offices, exam rooms, a dentist office, etc.

Of course there was a beautiful chapel with shrines honoring St. Camillus and Mary Health of the Sick. A description of the chapel mentions altars made of Connecticut pink granite, an altar rail of Formica, and bronze-gold carpeting.There was also a “drive-in” confessional to accommodate wheelchairs.

While the building was beautiful it should not be forgotten that the hospital was home to patients with multiple sclerosis, Alzheimer’s Disease, Parkinson’s Disease, cancer, brain injuries and more. It was “home” for these patients who were served lovingly by Camillians and lay people. The facility remained a hospital until July 1988 at which time it became a skilled nursing home facility. In 2002 the Camillians affiliation with the nursing home ended and an important chapter in the Order’s history closed.