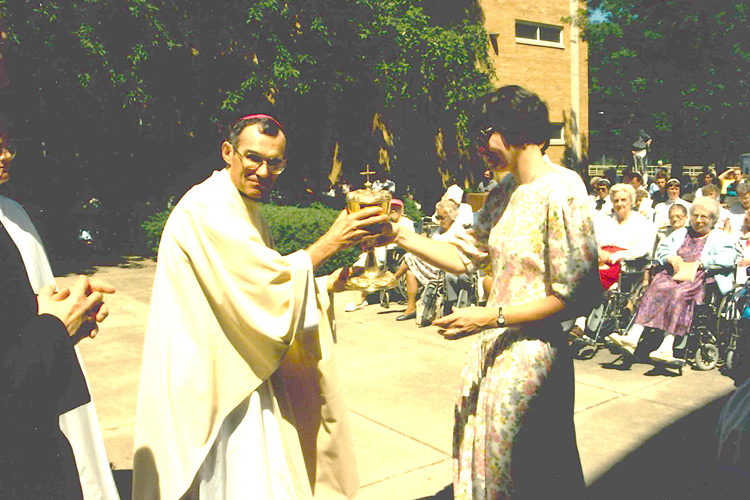 The St. Camillus Campus is well-known for its Feast Week activities in mid-July. Early objectives of the Week included the need to increase the awareness of the mission and core values of the campus and of the Camillian Order. The need to increase unity among the departments of the campus. And, the need to have fun! Why does Feast Week occur in mid-July? Because St. Camillus died on July 14, 1614.

The first Feast Week was held in 1989. Festivities that year included an outdoor Mass; also the showing of a video that depicted Camillian activities throughout the world. There was also a “Red Cross” Day where employees were given a “Camillus Cupcake” and were asked to wear red. Of course, there was also “Bingo Day” which was sponsored by the St. Camillus Women’s Guild.

As time has passed the Week’s activities continue to honor St. Camillus and to emphasize the importance of teamwork. In 2019 for example there were Masses for the Anointing of the sick. The monthly Community Coffee at San Camillo featured Camillians speaking about the Order and its ministries. On the lighter side, picnics and ice cream socials were held throughout the campus that allowed residents and employees to celebrate St. Camillus. For the past few years the week’s activities have ended with Mass at Festa Italiana on Milwaukee’s Summerfest Grounds.